A view of the key civilisations, occupants and people that have played a key role in shaping current Corsica.

The Torreans came from Asia Minor and invaded the South of Corsica during the second half of the II millennium BC. The characteristic building of this culture is the "Torre" (Tower) they've built on the island. Identified with the Corsi, a people that lived in Corsica and north-east Sardinia during Roman times, they are probably one of the main ethnic group of the islands together with the Iliensi and the Balari of Sardinia.

The archbishop of Pisa was given charge of Corsica by the Church in 1077. To date, the pisans, together with the Genoese, have probably had the strongest influence on corsican arhictecture and language.

The pisans built many of the romans chapels and churches of corsica and notably the popular and iconic church of “San Michele di Murato”, so characteristic with its two-colour stonework. They've also left their mark on many of the “maisons de maitre”, boasting yellow and green pastel colours marrying perfectly with the sunny weather and also striking a strong difference with the dark granite stone houses that can be found in the south.

They also developed an active trading relationship between Corsica and Tuscany (Tuscany's coast faces the north-east of Corsica), exploiting the resources of the north; olive oil, chestnut, wine, but also wheat, leather, cattle, woods and fishing. Unfortunately, most of this trading was done to the benefit of the tuscan merchants rather than the corsicans.

This inevitably led to the development of corsican piracy and to the pisans seeking the help of the Genoese to maintain peace on the island. having gradually gained strength in the mediterranean region, the Genoese firstly shared power with the Pisans but then took full ownership of Corsica. They notably crushed the pisans' fleet at the iconic battle of Meloria in 1284. All corsicans lords then gradually swore allegiance to the Republic of Genoa.

Despite a very long period of occupation (almost 500 years!) the Genoese almost always struggled to keep unity and peace on the island. Be it the unsatisfied corsican lords, the French (with Sampiero Corso – see his section), the Spanish, Malaria or the Plague (1348), there was probably hardly a time when the Genoese held full control and found stability for Corsica.

Their architectural and cultural imprint is surprisingly small for such a long period of occupation , especially in comparisons to the Pisans. Churches of Baroque coloured style with stucco interiors were probably their main contribution. However, what now sticks as "Genoese" in the mind of most visitors are the guard towers they've built along the coast that are now a key trademark of Corsica as well as the many citadelles (Calvi's being the most iconic) built to protect coastal cities.

Generally, the Genoese never managed to controlled the inland and this is where the revolt for independence came from, starting in 1729 and finding its accomplishment in 1755 with Pascal Paoli.

Born as a common man in 1498 near Bastelica , Sampiero Corso is probably the first popular corsican figure (although several corsicans who led peasant feud against the Genoese could be considered as such too). He joined the French army as a mercenary around 1535 and joined the invasion of Corsican by the French as a colonel in 1553. The invasion was a success and all coastal cities held by the Genoese were taken. The french retreated following a peace treaty but Sampiero decided to sustain the insurrection against the Genoese. He was assasinated in 1569. He also married at 47 the noblewoman Vanina D'Ornano, 15-year old at the time. The marriage ended dramatically with Sampiero strangling his wife by his own hands for betraying him to the Genoese.

Jean-Pierre Gaffory is another figure of the Corsican resistance and nationalism. Born in 1704 in Corte, he was first nominated protector of the corsican nation by some of the historical leaders of the corsican rebellion in 1745 and led the rebellion between 1745 and 1755. He is known for his bravoury and his victory over the Genoese in 1746 in the battle for the citadel of Corte. He was named general of the nations in 1751 but was assissinated in Corte in 1753, one fo the killers being his own brother, for reasons that still remain uncertain to date. 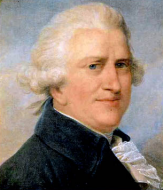 Pasquale di Paoli (1725-1807) is probably the most iconic figure of Corsica. He led Corsica into its only period of independence, as one of the first democracies in the world, for 15 years (1755-1770). Small wonder pro-independance corsicans of our days use his image and accomplishments as a reference for their own struggle.

Exiled in Naples with his father - Hyacinthe Paoli, already an emblematic figure on Corsica insurrection - in 1739, Pascal received there a sound education. He came back to Corsica aged 30 where he was elected General-in-Chief (Capu Generale) and was invested of the mission of a decisive war against Genoa. Underlying to his battles, his objective was to try and unite the various corsican clans to build true corsican unity. In November 1755, the people of Corsica ratified a constitution drafted by Paoli that proclaimed Corsica a sovereign nation, independent from the Republic of Genoa. This was the first constitution in Europe written under democratic principles. Seeing that they had in effect lost control of Corsica, the Genovese responded by selling Corsica to the French by secret treaty in 1764. In 1768 the French made a public announcement of the union of Corsica with France and proceeded to the reconquest. Paoli was finally defeated in 1769 in the Battle of Ponte Novu by vastly superior forces and took refuge in England.

England welcomed him with all the honors due someone who was considered as a real statesman and heroe of democracy by many political figures, writers and philosophers across Europe. He came back from exile in 1790 and attempted once more to separate Corsica from France. He succeeded in 1793 with the support of England's Nelson troops. An english-corsican kingdomwas then formed in 1794. This union lasted two years and, in October 1795, Pascal Paoli was forced by the French into exile again. He died in London the 5th of February 1807 and was burried in the cemetery of St-Pancrace. His ashed now rest in the village of his birth, Morosaglia.

The origin of the Maure head

Now widely used as the corsican flag, the Maure head with a white headband still retains some its mystery as to how it has become the symbol of the island. Many hypotheses were raised such as it being a symbol of the victory of the corsicans over the sarrasins in the IXth century or because of the maure head with a band over the eyes was used symbolise victory over the muslims during the crusades. In any case, it is Pascal Paoli who officialised its use as the icon of the Corsican nation in 1762. He is thought to have chosen it to replace the religious symbol of the immaculate conception, as part of his intent to reduce the influence of the church on the island.

Paradoxically, the most well-known corsican worldwide is probably the one in this list that is the least reverred by the corsicans themselves. And it is not so much for his much criticized actionsduring his reign as for his lack of consideration and attention to Corsica throughout. His growing opposition to the Paoli clan during the year when he came back to Corsica as a colonel-lieutenant of French army in 1792 is probably also another ground for criticisms from the corsicans.

Born in Ajaccio in 1769 in the aritocratic tuscan Bonaparte family, he was quickly sent to France to study and spent little time on the island. History books and biographies will provide you with all the information you need about this military, political and civil "genius" who ruled France for 10 years. In Ajaccio, statues, streets, cafes and houses bearing his name or that of the Bonaparte family bear witness of the influence of this powerful character on French history.

From the point of popularity outside of Corsica, Tino Rossi is probably the only corsican that could compete with Napoleon. Born in 1907 in Ajaccio, he became a popular singerand actor in the 30s and 40s. It is by playing in musical comedies that he truly gained his popularity and became a "latin lover" kind of figure, adored by French women and overplayed by radios. He even became popular in the US where he held a number 1 for 28 weeks with "Vieni Vieni" and was asked for movies in Hollywood; an offer that he turned down when helived in the US.

His most popular songs include Tchi tchi, Marinella, Vieni vieni, his interpretation of l"Ave Maria" of Gounod but, most important of all, his rendering of Petit Papa Noel, a Christmas song that, to this day (Tino rossi dies in 1983) brings him into the French top 50 every Christmas and got him into the Guinness book with over 300 million records sold.

Tino Rossi kept close ties and close friends in Corsica. Ajaccio pays tribute to his work with streets and squares bearing his name. He also often portrayed the corsican character in musicals and played in stories talking about the island but, somehow, never became a real iconic figure for the corsicans.

Claude Papi remains, to this day, the most popular corsican football playerand an iconic character for Corsica. Born in Porto-Vecchio in 1949, he joined the main club of the island, the SC Bastia, in 1968 and played for the club all of his career. 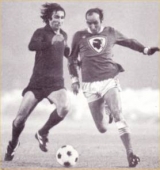 He made a strong contribution to the most successful period the club ever enjoyed. That period peaked in the 1977-78 season when Bastia participated in the UEFA club competition and beat all the big clubs of Europe only to lose in the final to PSV Eindhoven. It is certainly this campaign of "David against the Goliaths of Europe", along with his charisma and faithfulness to the SC Bastia, that contributed to make him such an icon for the corsicans. He died suddenly of anevrism in 1983. He also remains the only player of a Corsican team who played for France during a world cup (1978).