Foodies will find lots to enjoy in Corsica. The island offers a lot of dishes inspired by fresh and tasty Mediterannean products locally grown (tomatoes, zucchini, figues…) but also

products much more specific to Corsica and its inland mountain culture such as herb-fed veal, boar, brocciu, seasoning herbs of the maquis, etc… You will discover plenty of original dishes and new tastes. here are some guidelines to make the best of it.

Despite living on an island endowed with a large coastal area, Corsicans have never been a population of fishermen. Throughout their history, multiple waves invaders, Malaria and other threats have systematically discouraged them from staying on the coast. Corsicans have thus gotten used to live inland and their food is majoritarily inspired by this inland influence. Still, you will nowadays find tasty fresh fish and seafood readily available: wake up early one morning and buy a massive seabream or a fresh rock lobster from one of the many fish markets in the main cities. Our advice to cook fish and seafood: they are so fresh that you would spoil them with elaborate preparation. Fish barbecued in aluminium with a dash of olive oil, and garlic and ginger butter coating for your lobster will suffice. If cooking is not in your thing, you can enjoy simple and fresh fish dishes from many coastal restaurants. Go for grilled rather than “en sauce”  and try to favour the catch of the day vs the menu. Finally, a well-prepared fish soup will also go a long way but not all places do it fresh so try and seek recommendation of a good place. The most popular fishes and seafood in Corsica with their English names:
seabass – mulet
seabream – daurade
red mullet – rouget
John Dorry – St Pierre

Fresh vegetables and fruits – Corsica also has a rich local culture of vegetables and fruits as a mediterranean country: the taste of local fresh tomatoes, zucchini, eggplants, peaches, clementines, figues… will make it hard for you to go back to your local supermarket when you get back home!
It is easy to buy those products in groceries or supermarkets all over the island and it is usually made very clear on labels whether they were grown in Corsica or not.

Turning to the hills, one will find a rich corsican tradition of food using locally produced ingredients. it is important to note that a lot of those products can only be found during specifc time of the year and mostly not during the summer: one more reason to come off-season!

Boar and porc – Boar is more readily availalble and cooked during the hunting season, which runs from mid-August until the end of January. Freezing does not do too much harm to this game meat and you could probably eat proper boar dishes all year round. However, as a fairly “heavy” meat, you will only seldom find it served in summer. Boar is mostly cooked in stews and/or well marinated, to make it more tender and to tame its flavour. still, some slow grilled boar shoulders can taste heavenly when well prepared.
More generally,  pigs are bred all over Corsica so you will find a vast array of porc dishes and also a large range of delicatessen (see charcuterie section) products ensuring no parts of the pigs are left unused.

Kid – Kid is another meat that is more readily cooked as a winter dish and traditionally for Christmas. The meat is a little more refined than that of the boar, and is also generally cooked in stew with corsican beans or pan-fried potatoes perfumed with local herbs.

Veal – So there is veal and there is “corsican veal” (at least this is what the coriscans will tell you!). Basically the difference is that corsican veal is not purely milk-fed and will have eaten grass by the time it is killed. It gives a distinctive colour (redder than normal veal) and taste (often referred to scents from the “maquis” that the veal will feed from) to the meat. Less tender than milk-fed veal, it also has stronger flavours, not better, not worse, just different. In any case, this is definitely one of the corsican products to try. Veal in corsica will often be cooked with olives (look for the “pasta asciutta” popular dish) and also often stewed like his buddies above. Although fried tender veal steaks with a light wine sauce can go a long way.

Pigeon and thrush – Mostly known by visitors through the popular and flavoursome “pate de merle/sansonnet”, pigeons and thrush cooking in Corsica also gives way to delicious grilled dishes. there is also a specific season for grilled pigeons and it will be difficult to find them in restaurant unless they are ordered in advance.

Charcuterie (sausages and ham delicatessen) – Corsican charcuterie is one of the best in the world. It is usually strong in flavour and relatively lean. Its quality has more to do with the quality of the product, i.e. the local pigs, than with the production process itself. A lot of the flavour is linked to the fact that pigs in Corsica are raised in open spaces during a large part fo their breeding time and will eat a good amount of chestnuts and other tasty outdoor ingredients. The meat is also dried for a longer period (normally 12 to 36 months) than usual, which will reinforce the flavour and the “lean” feeling of it.
In order of popularity, the top charcuterie meats are:
– the coppa and lonzu, which, although they look quite similar, are made form different part of the pig and do taste different, with Coppa being the leanest of the two
– figatelli, a fairly fat liver sausage that unfortunately cannot be made in summer (and if you find some, do not buy it). It is best eaten grilled with eggs but is now also used to make tasty pates and for fresh pasta filling – worth a try
– corsican dried sausage, often known as salsiccia, it is a flavoursome porc sausage, leaner than the “rosette de Lyon” and other traditional french dried sausages. It can also be made from boar and donkey.
– prisuttu, the corsican raw ham is one of the best charcuterie delights. Real prisuttu is left to dry for a minimum period of 12 months and is an expensive dish. Not all corsican ham will be prisuttu and will have the exceptional taste of this long matured ham

product used in many dishes. With its cottage cheese-like consistence (although it tastes very different), it is used in omelets, pastas, baked vegetables, dessert flans (fiadone) and doughnuts. Bruccio is sheep or goat milk cheese made  from a mix of “petit lait” and full cream milk going through a process of heating, churning, salting and straining. It can be found fresh from December to July only. During the rest of the year, restaurants and markets will often use the “brousse” from Italy and the south of France to replace it. But it is definitely not the same unique taste. The “tomme” is a variety of corsican cheeses which were traditionally made in the south. They are made with raw sheep milk cheese and have a hard paste which taste can vary from very strong to mild. Corsicans use to wait until tiny maggots would create in the cheese to eat them as this was a sign of maturity! New regulations for manufacture will now prevent you from this experience, unless you maybe specifically ask for it. 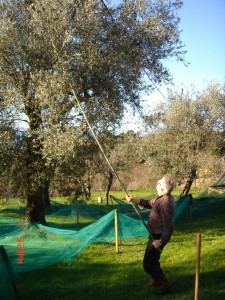 Olives and olive oil – Olive oil is one of the staple of Corsican cooking. Most salads, fried or grilled fish and meat are prepared using Corsican olive oil. Corsica has about 50,000 tress and produces about 250t of oil per year. A drop into the ocean of world production but also a sign that the making of oil on the island has been kept fairly traditional. Improvement in quality over the years has led to an official appelation Oliu di Corsica (AOC) in 2004. generally, corsican olive oil has the reputation of being refined, with a smooth and fruity taste. There are however several variety of olives on the island and taste will vary greatly from the production of Balagne to that of the valley of the Taravu.

Herbs – Also a staple of Corsican cuisine, herbs used for cooking are quite particular and come from the famous “maquis”, a name that simply descrbes this typical group of herbs thar deliver a unique scent, varying with the seasons and that covers the low hills of the island. Herbs will usually be more readily available in autumn and winter: thyme, juniper, myrtle, oregano, basil, multiple varieties of mint. Two type fo herbs in particular are specifically found and used for cooking in Corsica: the Nepita (a type of peppered mint) and the Persia. It takes time and patience to recognize and use the right type fo herbs for the right dishes but they will also bring a uniqueness to your corsican dishes.

Chestnut – Chestnut was commonly used by poorer populations to make bread and was a popular ingredient of many dishes. Nowadays its use is popular to prepare chestnut cakes, flans but also the famous “pulenda”, a semoula that is frequently used as an accompaniement of game, porc or veal stews. It is quite heavy and dry but absorb the sauce and flavours of stews nicely.

“AOC”, regulated appelation of origin, and thn the “AOP”, its european version, in 2000. One should probably talk about honeys rather than one product. The unique tastes and scent of corsican honeys are born out of the strong and rich scent of the corsican “maquis” (herbs) and trees that bees will forage.
The varieties are:
Spring honey – a fruity clear and golden honey that notably gets its taste from Clementini or, asphodel and mimosas
Sping maquis honey – slightly more amber in colourand richer in flavour with tastes of cocoa and caramel and scents of liquorice. It is generally originated from lavenders, brooms and heather
Summer maquis honey – coming from the high valleys of corsica, it is light-coloured; its strong fruity and flowery scent is born out of thyme and brooms and anthyllis
Autumn maquis honey – a creamy and bitter honey influenced by the scent of arbutus, it is often used for cooking due to its limited sweet taste
Chestnut honey – influenced by chestnut but also broom, thyme, chestnut honey has an amber colour and a light bitterness to it. Its taste is relatively strong and lingering with a strong “tannin” to it
Maquis honeydew honey – a strong dark amber-coloured honey made of the foraging of honeydew of bees, it has a malt taste to it with lingering caramel, liquorice and ripe fruits aromas
More about honey in Corsica: http://www.mieldecorse.com